Rev. Rick Iannucci is a retired U.S. Marshal and former Green Beret. He is a rancher and the founder and Executive Director of Horses For Heroes – New Mexico, Inc., where he combines his lifetime of horsemanship training with his military and police special operations training experience, creating this one-of-a-kind program, the first and longest running program for Post Traumatic Growth in the nation.   Rick commanded a Special Missions Unit in Colombia, served as an instructor at the U.S. Military Academy at West Point, and was a member of the elite U.S. Marshals Special Operations Group (SOG).

Rick is also an Ordained Priest (Celtic Catholic Rite), currently serving in the Episcopate (Diocese) of New Mexico and Indian Country, and as the Chaplain and Chaplaincy Section Chair for the National Tactical Officers Association (NTOA.org) and the Santa Fe Police Department. He is also part of the SFPD’s Critical Incident Debriefing and Peer Support team, and represents them as a member of the Santa Fe Interfaith Leadership Alliance.

Click here for more information on Horses For Heroes

"The Other Side of PTSD"

Cowboy Up! is a unique horsemanship, wellness and Skill-set Restructuring™ program based in Santa Fe, NM free to ALL post 9/11 Veterans and active military (both men and women) especially those who have sustained PTSD*, physical injuries, or have experienced combat trauma during their time serving our country. From day one Veterans are hands on with our horses beginning with groundwork and progressing to riding, as well as participating in other aspects of ranch life, including working cattle and more importantly experiencing the camaraderie with cowboys who are Veterans themselves. 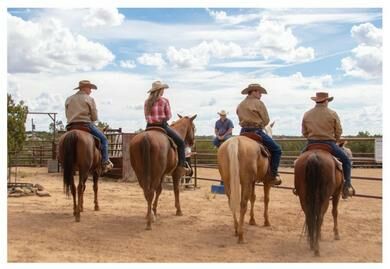 Above: American Gold Star Mothers Memorial Wall to NM Fallen Heroes, located on the West wall of the Warrior Bunkhouse.